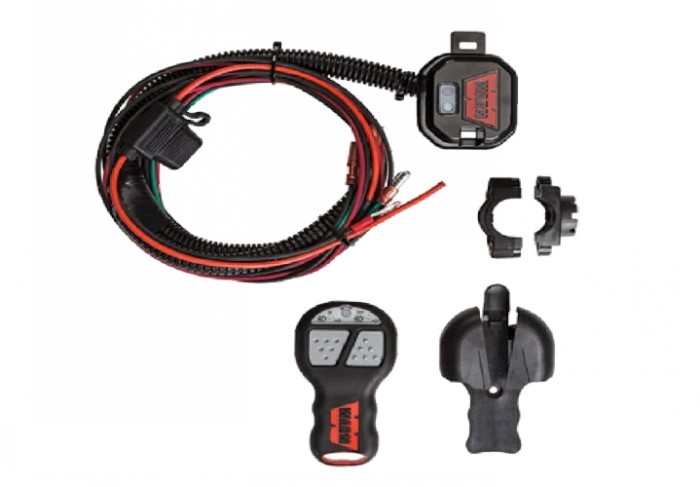 While being able to use your Argo’s winch from the driver’s seat can be handy, there are times where it makes more sense to reel in or release line from outside the vehicle. With the Warn Provantage wireless remote, you can control your Argo’s winch from up to 90 feet away, making it easier to get your XTV unstuck or pull out other vehicles. Here’s how to install the remote kit and use it with your Warn winch.

There are two styles of remote receivers. Newer winches have a socket to connect a wired receiver. The remote receiver plugs into this socket. Slip the attached carabiner over the plug cover to keep the receiver from falling off.

On older models, the receiver must be bolted to the vehicle, wired into vehicle power, and connected to the winch and in-cabin switch:

1. Drill two holes in the hood support at the back of the engine compartment to mount the receiver. The closer you can mount the receiver to the fuse block and buss bar, the easier it will be to connect the wiring. Use the included nuts and bolts to mount the receiver to the support.
2. Find the yellow ignition wire used to power the winch switch on the buss bar next to the fuse box. Attach the included T-tap connector to this wire. Connect the blade terminal to the red wire on the receiver’s wire harness, then plug the terminal into the tap connector.
3. At the front of the engine bay, you’ll see wiring that connects to the backside of the winch. Unplug the green and black wires on the top of the winch solenoid. Plug these wires into the color-matching wires on the receiver. Each wire has either a male or female end, so you can’t plug the wrong ends together.

If you have an old-style receiver, start by checking the vehicle wiring. Turn on the ignition, then use the in-cabin switch to move the winch rope in and out. If the switch works, the receiver is wired in correctly.

If the LED flashes red, the remote batteries are low. The remote uses two 12 volt Type 23 batteries. To replace the batteries, remove the two screws on the underside of the remote. Use a small flathead screwdriver to pry apart the two halves of the remote. Install new batteries with the positive side facing the buttons. Reassemble in reverse order.

Having trouble getting the remote to work? The remote will not activate the winch if the in-cabin switch was used to turn the winch in the past 10 seconds. The maximum range for the remote is between 50 to 90 feet, depending on terrain conditions. If you’re too far away, or the batteries are weak, you may need to change position to get a good signal.

Shank’s Argo is Your Headquarters for Argo Amphibious ATVs

Shank’s Argo does more than just sell Argos: we can install the accessories and make the repairs you need to get the most out of your XTV. Visit us at 4900 Molly Pitcher Highway in Chambersburg, PA. To learn more or schedule a test drive, visit ShanksArgo.com.