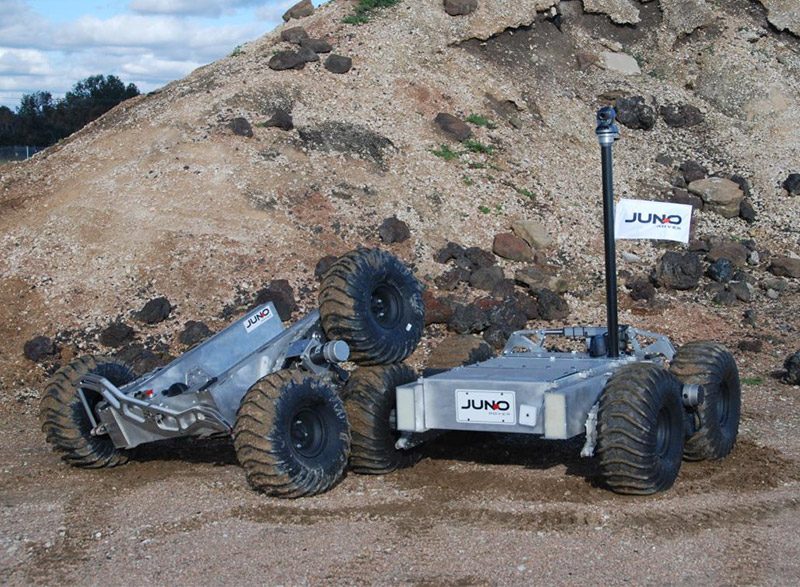 Argo makes vehicles that can handle terrain that stops other vehicles, but did you know they also build vehicles for space? 11 years ago, Argo’s parent company, Ontario Drive and Gear (ODG,) opened the Xtreme Terrain Robotics division. Over the years, they’ve applied technology developed for amphibious ATVs to a succession of rover prototypes. In the future, these will aid moon research and help astronauts on our first manned missions to Mars.

In 2008, the Canadian Space Agency (CSA,) NASA and ODG partnered together to make new rover concepts for use on the moon and Mars. The Juno Mobility Platform uses a four-wheel skid-steer system similar to an XTV, but it uses electric drive in place of Argo’s gas and diesel engines. Instead of a hull, the Juno has a flat bed that provides a mounting point for any equipment required for the mission.

The company developed three four-wheel skid-steer rover prototypes before landing on a final design. Weighing in at 660 lbs, the Juno IV can carry over 600 lbs. of equipment at almost 8 mph. To put that into perspective, the Curiosity rover weighs 1,982 lbs. and carries just 180 lbs. of scientific instruments. A Juno-based Mars rover would greatly decrease launch costs while increasing the types of data it could collect. The prototype was controlled remotely, but autonomy was needed for space missions.

After the success of Juno, ODG joined forces with the Neptec Design Group to create a semi-autonomous rover with increased capabilities. Neptec specializes in space technology, having worked with several space agencies across the globe including NASA and the ESA. They also had a major hand in the development of the International Space Station.

The result of this collaboration is the Artemis. This 8 wheel prototype weighs 1,160 lbs, can carry up to 600 lbs. and has a top speed of 9 mph. Like Juno, it has a flat bed for instruments, but it’s also designed to carry astronauts.

This scaled down version of the Artemis was selected by NASA for testing RESOLVE, a set of instruments that will detect water on the moon’s surface. NASA sees this as an early step toward a manned mission to Mars. If successful, a future rover could find water that can be extracted and used to supply astronauts on the planet’s surface. The prototype endured 9 days of testing in Hawaii, climbing volcanic mountainsides to simulate Mars’ terrain.

The CSA and NASA partnered together on the SPRP project to a standardized rover platform that would be small and cheap to deploy. Based on technology from Juno and Artemis, ODG’s entry weighs just over 200 lbs. and can carry up to 110 lbs.

Previous rovers used the same amphibious tire design used on Argo XTVs, but an air-free solution was needed for environments with little or no atmosphere. The Titanium Interlaced Rim Enabling Lunar Exploration and Surface Sampling (TIRELESS) wheel replaces the tire with metal paddles attached to springs, allowing the wheel to flex and grip surfaces like an amphibious tire.

ODG’s prototypes proved the effectiveness of their traction technology on extraterrestrial terrain, so the next step was getting these systems to work in extreme environments. The LRPDP was exposed to vacuum, lunar dust and temperatures from -292 to 266°F to prove the rover can survive on alien planets.

Bringing Rover Technology Back to Earth

In 2014, ODG Robotics introduced the J5, a fifth generation of the Juno rover designed for service here on Earth. The J5 is built for use in areas unsafe for humans and can be configured for multiple roles including firefighting, emergency medical services, and bomb disposal. These XTRs are controlled remotely, like a drone. The J6 and J8 Atlas were added to the lineup a couple of years later. These larger XTRs share much of their design with full-size XTVs, giving them increased payload capacity. Currently, these robots are not sold to the general public.

The Ultimate Vehicle for Traveling Around the World and Beyond

Shank’s Argo can’t help you with your next space mission, but we do offer vehicles that use the same technology being developed for NASA and CSA rovers. If you want to get the ultimate all-terrain vehicle, or you need help with your current XTV, visit our showroom at 4900 Molly Pitcher Highway, Chambersburg, PA or schedule a test drive online.